An Evening of Comic One- Acts Dazzle in New Theater 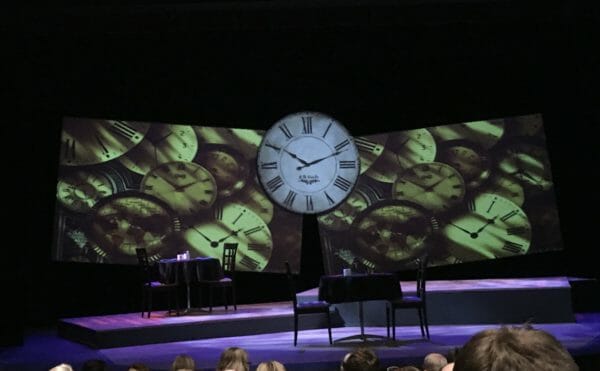 Friday and Saturday, November 1 and 2, Academy’s Fall Student Production, “An Evening of Comic One Acts”  . . .  well, it happened.

Academy’s renovated theater, with its balcony and dark colors designed for a more theatrically intimate, modern “box” feel was appropriately christened by a trippy, avant-garde production that was no less adventurous. Palpable in the theater lobby after the performance was a collective wide-eyed and slightly overwhelmed yet amused smiles of Wow. I’m not sure what I just watched, but it sure was fun.

Juniors Tsega Seleshi and Sejal Jindal set the night’s whirlwind pace and zany energy from the beginning with impressively rehearsed, rapid exchanges in “Sure Thing” with Seleshi’s character’s repeated cringeworthy and unfortunate yet all-too-relatable advances on Jindal’s elicited hesitant, uncomfortable laughter. Can I laugh at that joke? Can she say that? Does her character have amnesia, or am I missing something here? Who’s to say? The flying sketch left no time to question and left us with even fewer explanations.

This bewildered hilarity was a motif throughout the production. In “Phillip Glass Buys a Loaf of Bread,” the cast of Katie Wu’23, Kate Fornshell’23, Rebecca Taylor’20, and Simon Iobst’20 corrupted the words of Iobst’s Glass’ bakery order into the lyrics of a percussive, catchy, and musically-entertaining yet utterly incomprehensible melody-only to snatch poignancy and a reflection on the enduring nature of love from the clutches of hysteria at the last possible moment.

“Universal Language,” featuring Ryan Reagan’22 and C.J. Leet’21, underwent a similarly jarring gear shift. After babbling in a ridiculous, gibberish dialect for an entire scene, showcasing impressive acting, Reagan and Leet’s characters became enamored of each other as the latter overcame her speech impediment, illustrating the power and universality of language.

Lest the audience revel in these profound moments of sanity, comically misshapen sketches like “Check Please” — a torturous and awkward masterclass in how not to blind date — and “The Philadelphia,”  in which Iobst’s, Friedman’s’20, and Vazirani’s’21 characters casually denigrated the better part of American urban life-maintained a no-holds-barred, off-the-cuff style that left the audience with side stitches.

Beneath the vaguely psychedelic lighting of Salvador Dali-esque timepieces, the  cast kept the show’s haphazard, slapstick vibe so well that even technical difficulties and breaks of character were far from detracting. In fact, this may have been the one play where such mishaps actually enhanced the overall atmosphere and effect.

As if a self-aware commentary on the work itself, a look inside the minds of sentient experimental chimps in “Words, Words, Words” illustrated the folly of creating art in hopes of measuring up to a past genius-like Shakespeare.

Make your own art for its own sake, Rosie Gruber’s ’22 chimp all but howls: a fitting ultimate message for a wholly unorthodox and entertaining evening. 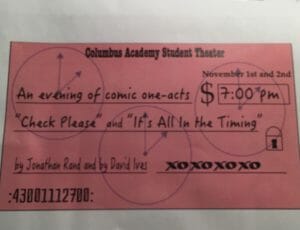