On Saturday, February 22, Academy took on Sycamore at the Ice Haus for the first round of the OHSAA state qualifying tournament.

Understanding the high stakes of the game, the Vikes came out firing, with junior Luke Budzik scoring only three minutes into the first period, assisted by classmate Andrew Golden. Unfortunately, Sycamore had the same attitude and quickly tied it up. Luckily, Academy regained the lead with 7:30 to go in the period when sophomore Allen Koganov scored on the powerplay. Only 30 seconds later, junior Campbell Gwin bagged his first of the night and minutes later his second off an assist from sophomores Jake Carlin and Connor Harris to finish off scoring in the first with a 4-1 academy lead.

Sycamore seemed to only be fired up by this deficit and pulled one back in the opening minutes of the second, then again with 9:07 to go, and a third time with 5:58 left in the period. With this flurry of goals from Sycamore, the game was tied up heading into the third.

Five minutes into the period, Carlin put the Vikes ahead assisted by Koganov and sophomore Andrew Zaki. Another five minutes later, Gwin finished off a hat trick assisted by Golden and Carlin. Finally, with two minutes to go, Gwin added a fourth to his tally to cap off the night, advancing Academy to the second round of the state qualifying tournament with a 7-4 victory.

Academy was back in action at the Ice Haus on Sunday, February 23, to face off against two-seed St. Charles at 4:00 pm.

The Vikes put up a tremendous defensive front with some successful offensive effort, with Carlin, Budzik, and Walker earning the team three goals. But the Vikes couldn’t stop St. Charles’s relentless pressure, and conceded the game 8-3, ending the team’s solid season. 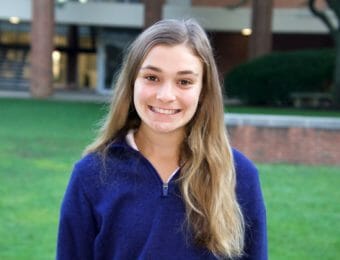