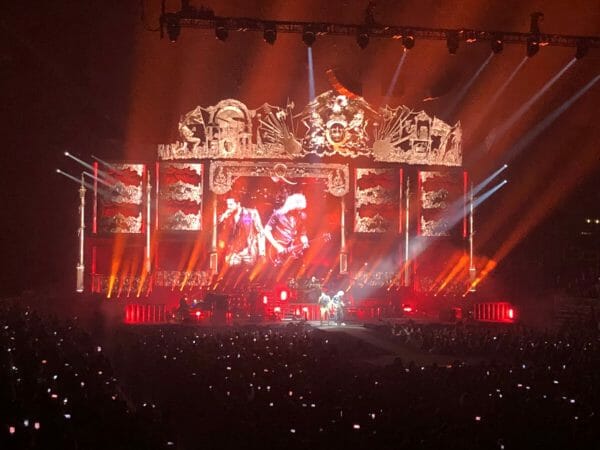 Among the classic rock bands that characterized the ‘70s and ‘80s was Queen, a group that I have become familiar with and come to love over the past year or so. As such, when I learned from my parents on my birthday in January that they had gotten tickets to the upcoming Queen + Adam Lambert concert that would be taking place on August 13 at Nationwide Arena, I was absolutely ecstatic.

Following the passing of the band’s lead singer Freddie Mercury in 1991 and the retirement of bass guitarist John Deacon in 1997, the remaining band members—lead guitarist Brian May and drummer Roger Taylor—have collaborated and toured with artists such as Paul Rodgers and now Adam Lambert. The latter has been singing alongside Queen for eight years, and for most of the time that the two artists have worked together, they have performed under the “Queen + Adam Lambert” name.

As my parents and I entered Nationwide Arena with containers of nachos, soft pretzels, and bottles of water in hand—as well as concert tee-shirts for the Rhapsody Tour—we got our first look at the stage; at first, one might have only recognized a golden image of the Queen crest being shown on a large screen, but after looking closer at what sat on each side of the crest (within the image), it would have become evident that objects such as electric guitars and drum sets as well as halberds, spears, and axes—all with a gold coloration—were also present. It was an impressive piece of artwork that spoke to the excellent staging that was to come.

After waiting an approximate forty-five minutes for the concert to begin, the background music’s volume rose drastically, and the crowd erupted into applause and cheering. An instrumental rendition of “Innuendo” started to play, and the stage began to transform; screens appeared at the sides of the stage as well as in the center of it, and the screen showing the Queen crest rose to the top of the stage. The band was ready, and the audience could not wait. As if in an answer to the crowd’s excitement, a silhouette of May with his signature curly hair and Red Special guitar in hand appeared as the band played, “Now I’m Here.” Red lights flashed across the arena and continued to do so as Lambert entered and seemingly teleported from place to place around the stage. Taylor came into view as well, and the band finished the first song of the night together. The show had begun.

Some of the best renditions of the show as a whole were, in my opinion,
“Keep Yourself Alive,” “The Show Must Go On,” and “Machines (or Back to Humans).” In addition to the music itself, the staging of the concert was worthy of note; from the use of lights of all sorts of different types and colors to the appearance of a motorcycle during a particularly theatrical performance of “Bicycle Race,” the stage crew made their expertise apparent.
While I was admittedly far more excited to see the remaining members of Queen than I was to see Adam Lambert, the latter eliminated any doubts I might have had at one point or another about whether Lambert is an appropriate frontman for Queen. Not only were his vocals awe-inspiring (and his costumes spectacular) on the night of the concert, but his humility and complete respect for his fellow performers were also made clear; he gave a brief but moving speech thanking May and Taylor early on in the show, and he never made any attempt to upstage the band.
Brian May, I must admit, was the musician I was most excited to see, and he definitely did not disappoint: his guitar playing was absolutely the most impressive part of the show. Some of his best playing came during “Bohemian Rhapsody.” He also had the lead vocals during songs such as “‘39” and “Love of My Life,” though in the latter, a recording of the late Freddie Mercury took over for May after a short while. This served as a nod to Mercury in itself, but May also paid tribute to Queen’s former frontman in the form of a heartwarming speech that mentioned the singer and addressed the audience. May spoke about the last time Queen had performed in Columbus (which was in 1977), joking that much of the audience at the concert had likely not been alive at the time of Queen’s last visit to the capital of Ohio. During “Love of My Life,” May asked for the audience to put on their phones’ flashlights, which created a dazzling display all around the arena. Later on, when May performed an especially electrifying guitar solo, he was made to appear to be rising above the stage atop an asteroid with a video of space behind him: a tribute to his connections with astrophysiology. For his solo during “Bohemian Rhapsody,” a song performed near the end of the concert, May appeared in a striking cyborg costume that brought about a massive bout of cheering from the audience. While Lambert served as the band’s frontman, it was clear that May was the star of the show.
Roger Taylor’s drumming was both intense and incredibly complex. His singing was also noteworthy; he took the lead vocals for one of his signature songs, “I’m in Love with My Car,” and he took the parts of the late David Bowie during “Under Pressure.”
One memorable example of interaction with the audience came after “Bohemian Rhapsody” had ended; the stage lights faded, seeming to signify the end of the show. The audience, however, clearly knew better, for they began to cheer, some even stomping twice before clapping, showing that they were still expecting “We Will Rock You.” After a moment or two, the encore began with a recording of Freddie Mercury singing his signature “Ay-Oh.” During this, the audience responded to each “ay-oh” with their own as Queen’s crowds always did during Mercury’s days with the band. To finish off the night, the band performed “We Will Rock You” and “We Are the Champions” before taking their bows with a recording of May’s rendition of “God Save the Queen” playing in the background.
The music, the light effects, and the surprises all helped to make a night with Queen an adventure and an unforgettable one at that.
Author